There are a ton of different ways to play Yahtzee. Yahtzee Turbo, Yahtzee Jr., and Yahtzee Texas Hold ‘Em – they are just the tip of the iceberg when it comes to the diversity of Yahtzee gaming. These officially licensed variant games use unique rules, equipment, scoring and gameplay elements to take the familiar game to new and wonderful places. Learn about the original six Yahtzee variations: Triple Yahtzee, Challenge Yahtzee, Word Yahtzee, Jackpot Yahtzee, Casino Yahtzee, and Showdown Yahtzee. The original source of the game now known as Yahtzee is hard to pin down with certainty, but its various origin stories are fantastic. It was either invented by a wealthy couple on a worldwide yacht trip, dreamt-up by the board game executive who created the game Bingo, or has been played for thousands of years in central Asia. But despite the murkiness surrounding the mother game, it has spawned an array of derivatives whose histories can be clearly traced.

Standard Yahtzee was first mass-produced in 1956 and quickly went on to become the best-selling dice game in history. As a result of this commercial success, the game’s modern corporate overlords sought ways to expand Yahtzee’s reach even further. Rapid advancements in computer technology allowed the game to move into the digital era where it proliferated on gaming consoles, personal computers, and smartphones. The ability to play Yahtzee online is one of the greatest successes stories of a tabletop game making the digital jump. But even before the electronic revolution made it possible to put Yahtzee in everyone’s pocket, the game had been branching out in new ways.

The easiest way to cash-in on widespread brand recognition was to create entirely new tabletop games within the growing Yahtzee family. Different Yahtzee games were key to future growth. Each of the Yahtzee variations would put a new spin on the old favorite by introducing an entirely new set of rules and/or gameplay. Sometimes elements from other popular games would be grafted onto the the original Yahtzee concept to form something different, if not entirely original. Considering that standard Yahtzee incorporates elements of Poker, it shouldn’t be surprising to see its offspring adopt a similar strategy.

Prior to the official release of the very first derivative game, Triple Yahtzee in 1972, deviation from standard Yahtzee rules only occurred in the unregulated underground board game scene. While none of these house rules made their way into an officially licensed Yahtzee product, many of them remain popular today. But the E.S. Lowe Company did eventually come to realize the potential of tapping into the variant rules craze and launched a covert R&D operation in the early 1960s with the goal of producing a viable Yahtzee variation game prototype. After millions of dollars of research and development, it turned out that you can just multiply your scores by three.

It turns out there are many different ways to play Yahtzee. While parent company Hasbro continues to probe the boundaries of the rule book and the Yahtzee game itself, the earliest variant games found varying levels of success in the marketplace and none of them are still in production. But sometimes the classics are hard to top. Each variant maintains a loyal throng of devoted followers and represents a precious artifact of yesterday’s Yahtzee. The original Yahtzee spin-off was launched in 1972, with promises of three times the fun. Discounting that Travel Yahtzee, which was simply a smaller version of the original, had been released two years earlier, Triple Yahtzee was the first true derivative game. It included a new layer of strategy but kept the overall changes rather modest, maintaining the same basic format as traditional Yahtzee.

Triple Yahtzee rules involve what is essentially playing three games of Yahtzee at once. The player may score a turn on any one of three game columns of their scorecard. This becomes a tactical decision as the Game 2 total score is doubled, and Game 3 is tripled. The totals of all three games are then added together for the final score. Recording high-point scores in Game 2 or Game 3 where they will be multiplied is therefore of paramount importance to obtain the highest score.

New players are sometimes frustrated that Triple Yahtzee takes three times longer to play than a game of the original, but for others that is part of the allure. The game also formally introduces multiplication to the Yahtzee scorecard for the first time, helping to keep math skills sharp. As the first foray into a Yahtzee dice game derivative, Triple Yahtzee succeeds in appealing to fans of the original game while successfully adding a new layer of strategy. It remains one of the most popular variants ever produced.

“A fresh challenge for Yahtzee enthusiasts.”
“Three times the strategy, excitement and fun.”
“The 5-dice game with three times the fun and strategy.”
“Your favorite game of luck and strategy is now triple the fun.” In 1974, two years after Triple Yahtzee entered the world, the next variant game was released under new corporate owner Milton Bradley: Challenge Yahtzee. The new management took an enthusiastic approach toward further variation and launched a huge marketing campaign to promote their product. Jack Klugman and Tony Randall, stars of the hit TV show, The Odd Couple, were hired for advertisements. Challenge Yahtzee is still the only Yahtzee game to have had an official celebrity endorsement.

Gameplay is identical to the standard game except that all players score their turns from the same roll. They decide individually which dice to keep and how to score the rolls but all must work from the same dice. It’s this common roll element that forces tactical decision-making to the forefront. The official rule book concludes that “Although luck plays a role, the winning player will have used the best strategy.”

Challenge Yahtzee is the closest variant to a socialized form of Yahtzee, where dice rolls are used in common amongst the working masses. It also has the effect of keeping distracted, sleepy, or drunk participants focused on the game since all players are active on every roll. The decreased downtime is a sure improvement but the 1974 family may wonder why they paid good money for a game that could be played just as easily with their original Yahtzee set. Even the scorecard is the same as the standard version. But the dice tray and rolling board are innovative, if superfluous, new additions.

“All players score from the same roll.”
"It's neat." In 1978 Yahtzee metamorphosed into a spelling game. Original Yahtzee owner, the E.S. Lowe Company, had been producing Scribbage, a word-based dice game, since 1959. To boost sales for the flagging game, a pared-down version was fused with Yahtzee elements and rebranded as Word Yahtzee. It was a shot across the bow of the upstart spelling game Boggle, which had released to much fanfare in 1972, that Yahtzee was serious about rolling some words.

The main deviation from the standard game is Word Yahtzee’s use of letter dice. Players roll seven dice within a one minute period to form words and earn points. The face of each die features a letter, along with a subscript number to indicate the score for that letter - just as in the game Scrabble. The scorecard has a familiar Yahtzee feel with Upper and Lower Sections. To score a Yahtzee a player must be able to form a 7-letter word.

Word Yahtzee really took Yahtzee in a whole new direction. The first two variant games took care to not veer too far from the original’s tried and true gameplay elements. While Word Yahtzee did keep the dice, it removed numbers from the equation. Perhaps because of its tenuous relationship to vanilla Yahtzee, Word Yahtzee is typically one of the lowest reviewed variant games. 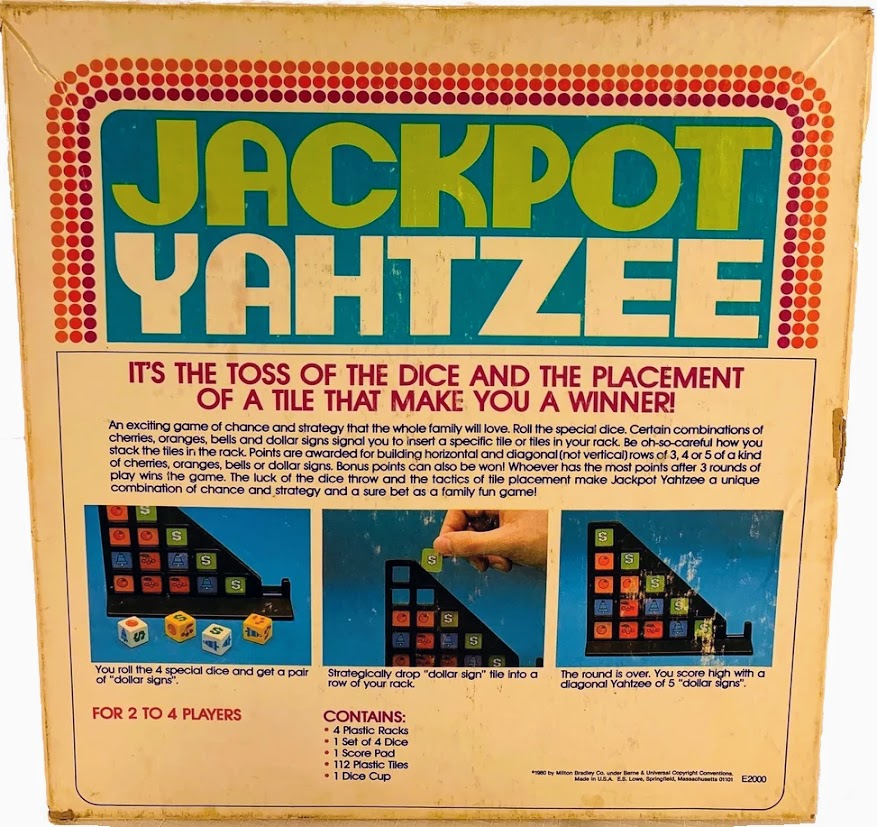 Jackpot Yahtzee is generally considered to be in the upper echelon of variant games but unfortunately it also had the shortest production run. Using Word Yahtzee as a template, it continued the trend of incorporating gameplay from other games into Yahtzee by leaning heavily into mechanics borrowed from the 1970’s hit Connect-Four. The design invoked an exciting esthetic of casino imagery, like using typical slot machine symbols - dollar signs, bells, oranges, and cherries - on the dice.

In addition to special dice, Jackpot Yahtzee features plastic racks into which tiles are dropped to score points. Gameplay involves players rolling the four special dice to earn tiles. The tiles are then tactically inserted into the 16-slot triangular scoring rack to form horizontal or diagonal rows. The effect is reminiscent of spinning winners on a slot machine.

Some players feel that the hybridisation of Yahtzee and Connect-Four feels sloppy, with the latter game’s mechanics simply tacked on. But it undeniably adds another layer of strategy to keep players thinking. Prized for its unique game equipment, innovative tactics, and overall rarity, it is considered to be a rare gem to Yahtzee connoisseurs.

“Win big with a little luck and a lot of strategy.” The game itself has little to do with casino gaming and is more clearly influenced by the game Bingo. Yahtzee and Bingo were both created by E.S. Lowe so it’s an unintentional but fitting tribute that Casino Yahtzee was released in the year of his death. Each player rolls the dice and then marks the corresponding numbers on a 51-space game board. Points are scored when the final space in a row, column, or diagonal is marked or “closed.”

Casino Yahtzee expanded the limits of Yahtzee by introducing the concept of an official scorekeeper, who keeps track of scores and calculates the totals for all players. It also features a popular scoring combination with a great name, the Rainbow Bonus, that doubles the points. Although it strays a bit from Yahtzee’s core game mechanics, the addition of Bingo elements to Casino Yahtzee makes for an exciting game. The age-old question of whether or not Yahtzee classifies as a board game was finally settled with the release of Showdown Yahtzee in 1991. There is no way you can miss the oversized board featured in this Yahtzee variant game. Under the influence of Monopoly-esque game mechanics, players are able to move their game piece around the board while fighting to gain control of open spaces.

When a player lands on an open space, they try to complete a standard Yahtzee scoring combination. If successful, they place the card for that combination on the space along with a certain number of chips to mark their ownership. If another player lands on that space later, they have to match or beat the roll to steal ownership of the board space. When a player rolls a Yahtzee, it’s treated like a wild card where they can ignore the space they're on and claim ownership of any space on the board. The game climaxes with Showdown Mode, a form of sudden death where players can steal cards from one another. After all players have played a round in Showdown Mode, the game ends and the player with the most chips on the board is the winner.

Yahtzee variations work best when they add an intriguing new layer of strategic thinking to the game. But some Showdown Yahtzee players complain that the addition of a game board simply adds another layer of luck. The board does indeed often limit decision making ability when a player is forced to roll a certain scoring combination. And too much emphasis is placed on the Showdown Mode, which really determines the winner, often leaving the opening rounds feeling a bit meaningless. Overall, Showdown Yahtzee features the same great game mechanics as Monopoly with none of the capitalistic domination.

Note: Confusingly, Showdown Yahtzee was released under different names in different regional markets. To make matters worse, a couple of these names were identical to previous Yahtzee titles. For example, it was known as Casino Yahtzee in the Netherlands and Challenge Yahtzee in the UK.

“Shake, steal & score for control of the board.”