Yahtzee score cards are one the few required pieces of equipment needed to enjoy a game of Yahtzee. A pack of scorecards, the Yahtzee scorepad, has naturally been included in all Yahtzee sets since the first production model was rolled out in 1956. The scorepad may seem endless when you first open your Yahtzee set but eventually you will come to the realization that only a few precious scorecards are left. When this panic sets in, try to remain calm as there are a plethora of options available to keep your dice rolling.

The simplest way to obtain more Yahtzee scorecards, also referred to as Yahtzee scoresheets, is to purchase a new scorepad from the manufacturer. Many Yahtzee players prefer to use the official scorecard as it exudes an air of dignity. In fact, most sanctioned Yahtzee tournaments require the use of official scorecards so it is always nice to have a stack at the ready. Then again, there is nothing in the rules that says you have to use a factory-made scoresheet. For the penny-pinching Yahtzeeist looking to save some dough or the radical dice roller who rejects the exploitative capitalist system entirely, you can select one of the templates below to print free scorecards online. Printable Yahtzee scorecards allow for ultimate customization, all from the comfort of your own home.

The Yahtzee scorecard has been refined over the years to reflect the game's changing design esthetics. The changes are cosmetic only as the game mechanics have remained the same since its introduction in 1956. For archival purposes, some of these iterations are captured below.

Yahtzee has been expanding with new game variants and formats ever since Travel Yahtzee in 1970. Over 50 years later it has cemented its place in popular culture yet continues to evolve. Download variant game score sheets so you never miss a turn. But you won’t find one for Showdown Yahtzee - it is the only Yahtzee game that doesn’t use a scorecard! 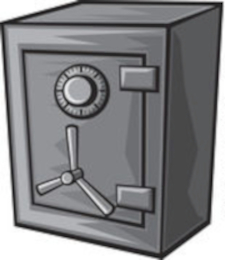 The feelings of joy that arise from playing Yahtzee with friends and family are undeniable. Nothing beats the sound of five dice rattling around in a plastic cup or dishing out high-fives after someone rolls a Yahtzee. But the fun doesn’t need to stop once the game ends. Yahtzee fans can derive hours of happiness in reliving prior games and momentous outcomes by reminiscing over old Yahtzee scorecards. Many people simply discard their completed cards. Other players only save scorecards if they’ve rolled a really high score. But the World Yahtzee Institute recommends keeping them all for future generations to study and enjoy.

We often hear from Yahtzee fanatics who have been dismayed to discover that their toddler has defaced their old scorecards with crayon scribblings or whose dog chewed them to bits. These kinds of accidents typically occur when completed scorecards are simply kept in the Yahtzee box with the rest of the equipment. While this is perhaps the most logical spot to stash them, consideration should be given to creating a more permanent home for old Yahtzee scorecards where they can be better protected from the elements.

Any secure place where you would typically store valuables can be transformed into an appropriate Yahtzee scoresheet repository. Popular choices include a personal safe, gun locker, jewelry box, under the mattress, underwear drawer, cookie jar, or a bank’s safety deposit box to name but a few. The most important considerations in selecting a safe storage facility is to choose a spot where the records will kept free from moisture, flame, and potential tampering.

Losing a Yahtzee archive to a natural disaster is bad enough, but to have precious data intentionally altered or destroyed could cause serious psychological harm. Misguided attempts at scoresheet forgery can damage the integrity of your Yahtzee records even more than an act of god. Common types of Yahtzee vandalism include data erasure, score manipulation, and outright thievery. To deter potential hooligans, consider installing an alarm system that will alert you when the security of your Yahtzee repository is breached.

The player recorded in games 2-6, Jonathan, defaced this scorecard by including an insult aimed at the game 1 player, Deb.

But change is unavoidable for all things in the universe so even the most meticulously insulated physical score cards will inevitably succumb to the ravages of time and entropic forces. Even absent any active vandalism or fraudulence, as evidenced by yellowed old books, baseball cards, and comic strips, the delicate nature of the scorecard paper itself renders it dangerously vulnerable to age-related decay.

So just as paper score cards replaced animal hide parchments, which in turn replaced stone tablet scorecards, technology is again taking Yahtzee scoresheet preservation to new levels. The certitude that all physical matter will degrade over time necessitates requires a longer-term solution than physical storage can provide. For long-term security, electronic means of preservation are the preferred method for maintaining an accurate record of Yahtzee scores.

One easy way to manage Yahtzee scores digitally is to forgo a paper scorecard entirely and use a simple computer spreadsheet to record your scores. This does require, or course, the use of a phone or computer during gameplay which may prove to be a hindrance to the flow of the game. Alternatively, the scores from a paper scorecard can be transcribed into the spreadsheet once the game has ended. Many players, however, like to include doodles or other artwork on their Yahtzee scorecards that cannot be translated into a spreadsheet format. In these cases it is good practice to electronically replicate the scorecards with a digital scanner or photographic technique. As the saying goes, nothing is certain except for death and taxes. While there is fortunately no tax on Yahtzee goodness, players should contemplate how to safeguard their scorecards after death. As a means of preserving their own Yahtzee legacy for posterity, scorecard depositories and associated data can be included in a personal will to be bequeathed to a loved one. The World Yahtzee Institute also accepts these records and will incorporate it into its master archive. With foresight and proper management, your Yahtzee scores can live on forever and you can take pride in your contribution to both Yahtzee history and its continued development.

As an additional measure of score conservation, consider converting old scorecards into Standard Yahtzee Notation (SYN). SYN was developed during the European ‘Age of Enlightenment’ as a way to apply the latest scientific developments to the preservation of Yahtzee scores. Over the centuries it has become the benchmark method to chronicle Yahtzee scores for future study. Its functional simplicity has since been applied to other games, most notably chess. A major benefit in SYN is its ability to record the sequence of scores in a given game, a capacity not included in the standard Yahtzee scorecard. Even with the modern advent of the printable Yahtzee scorecard for at-home use, classic standard notation remains a powerful analytical tool. 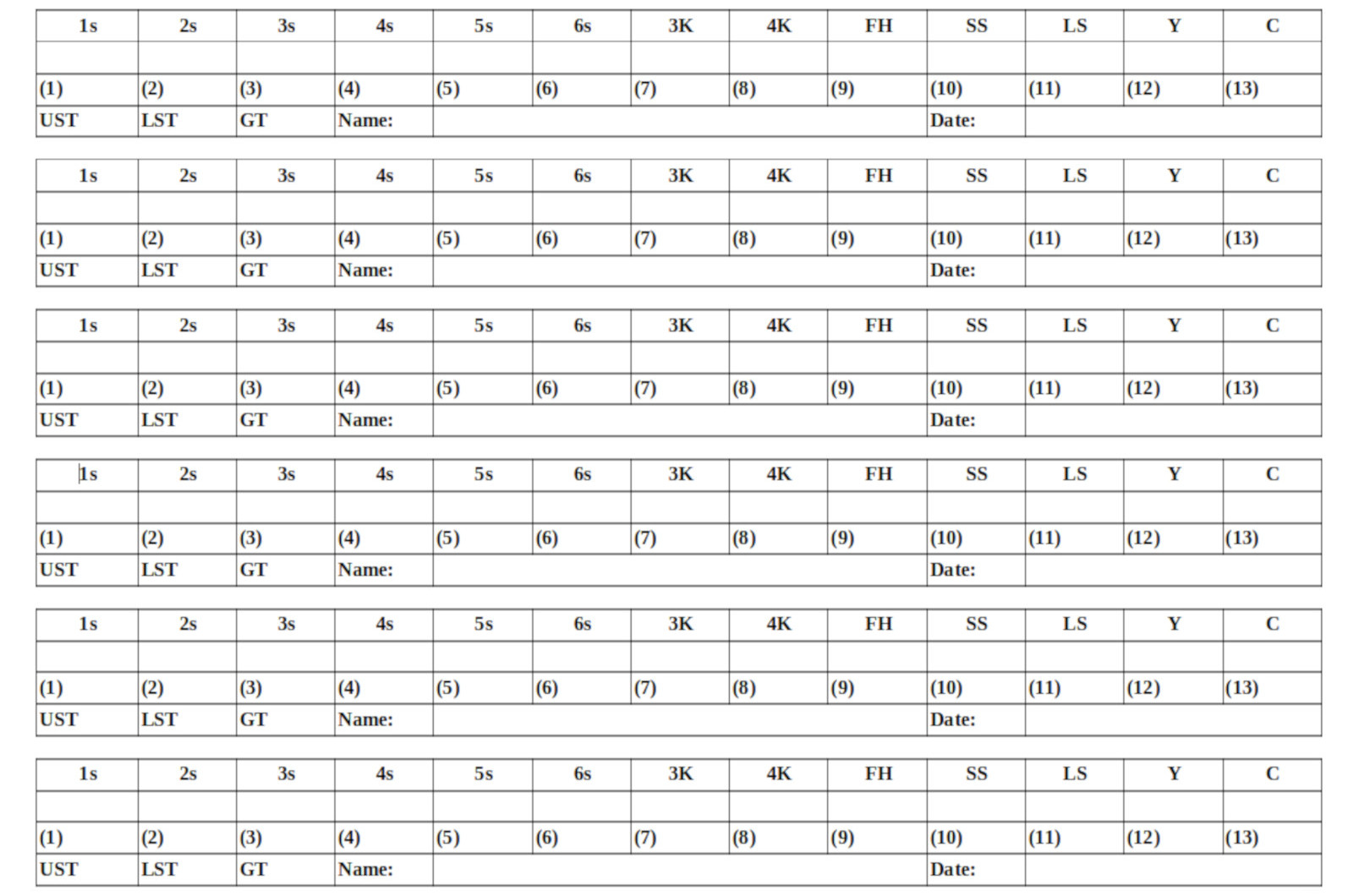 Standard Yahtzee Notation varies from the standard method by using a custom scorecard to allow the player to record the sequence of their turns. The advantages of capturing this additional information is balanced by a slight increase in the time it takes to record one’s score. The SYN scorecard must be marked twice for each turn – once in the traditional way by scoring category which eases the total score calculation at the end of the game, and again to mark the sequence of the turn. It provides extra insight into a players' tactics and skill level and, as its name suggests, is the standard way to record a Yahtzee game in competitive leagues across the world.

One SYN unit is a record of one game of a single player. The unit consists of sixteen entries - thirteen representing each turn of one traditional Yahtzee game and three for the totals, Upper Section Total (UST), Lower Section Total (LST), and Grand Total (GT). These sixteen entries are indicated by parentheses, which are each followed by the game data. The game data is depicted as an abbreviation of the scoring category marked in a given turn and then its numerical score. The following is an example of one SYN unit:

In this game the player started (1) by rolling a Large Straight (LS) which is always scored as 40 points. The second turn (2) resulted in scoring their Threes (3s) for nine points. Note that this game yielded three consecutive Yahtzees (Y), beginning on turn five (5). The subsequent Yahtzees on turns six (6) and seven (7) are recorded with ‘Y100’ to indicate the Yahtzee Bonus, followed by a ‘J’ notation to record the placement of their Joker score. Not surprisingly, this turned out to be a high-scoring game as indicated by the Grand Total (GT) of 526 in the final entry.

Note in the completed SYN scorecard below that the first two rows are used to record scores by scoring category as on a traditional scorecard. The third row uses Standard Yahtzee Notation to record the sequence of turns, (1) through (13). The bottom row captures the Upper (UST) and Lower Section Totals (LST) and the Grand Total (GT) of the game.

Yahtzee Variant Games - Yahtzee goes much further than just the standard game. New versions like Triple Yahtzee, Word Yahtzee, and Casino Yahtzee have been released regularly over the years. Get an overview of the original six variants and learn how to record your scores under a whole new set of rules.

Yahtzee Equipment - Take a closer look into the tools of the trade. Explore the intricacies of Yahtzee equipment, from the standard set and beyond. Discover how proper care and regular maintenance will not only prolong the life of your game but uphold universal values of fair play.

How to Care for Your Yahtzee Set - We answer letters from readers who have specific questions about proper game maintenance. The answers to the trickiest Yahtzee inquiries are not always obvious. Join us on a deep dive into some of the more challenging equipment topics.

&nbspHow to Make Your Own Yahtzee Scorecards

Printable scorecards are useless if you're out of ink. Or perhaps you are not inclined to fork over more of your hard-earned money to a corporate interest just to maintain your Yahtzee addiction. For the artistically-minded player seeking a new creative outlet, making a homemade Yahtzee scorecard is the perfect solution. 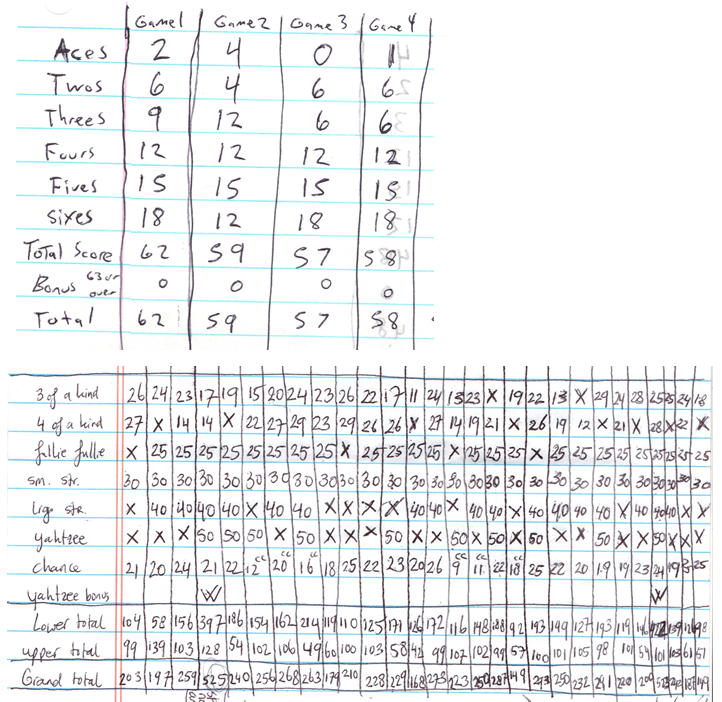 Column width will differ according to a player's personal preference and writing size. 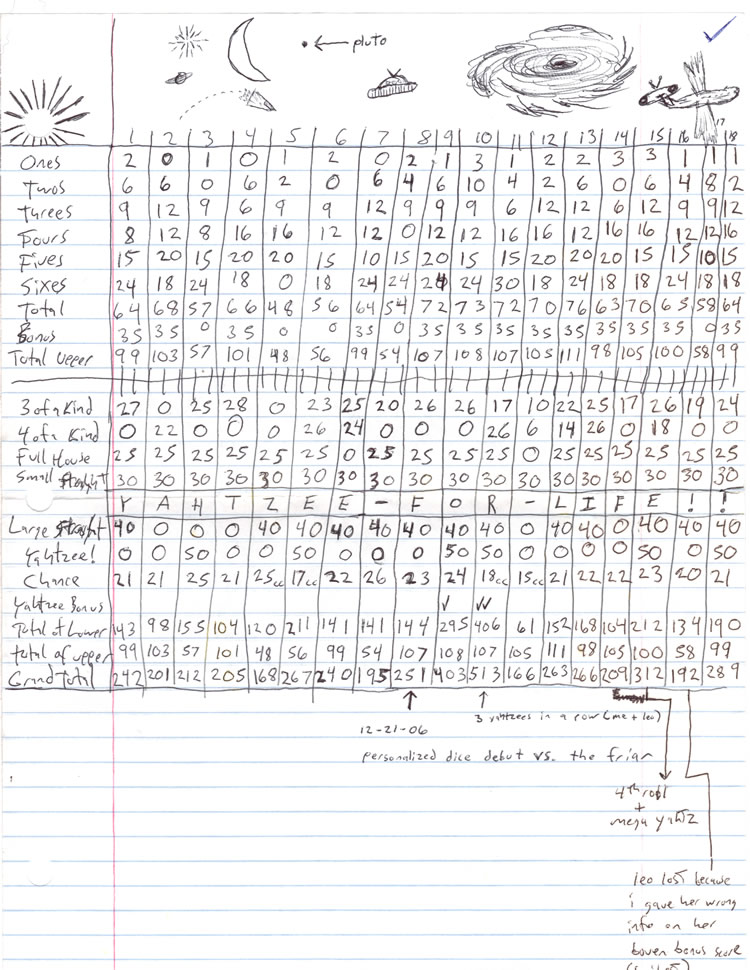 This score card has plenty of space
for notes and illustrations.

Unless you are using graph paper or another type of paper with existing lines, you’d be well advised to use a ruler or another type of straight edge. It can be quite difficult to draw all of the necessary lines free-hand. A pen or pencil are the recommended writing implements but depending on the players level of comfort with the device even crayons or magic markers will do the trick. Coloration and overall style may be of some importance to players who intend to display the completed scorecard publicly, such as on a refrigerator or in a frame. In any case, take care to store your finished product carefully to maintain a permanent record of your Yahtzee games! 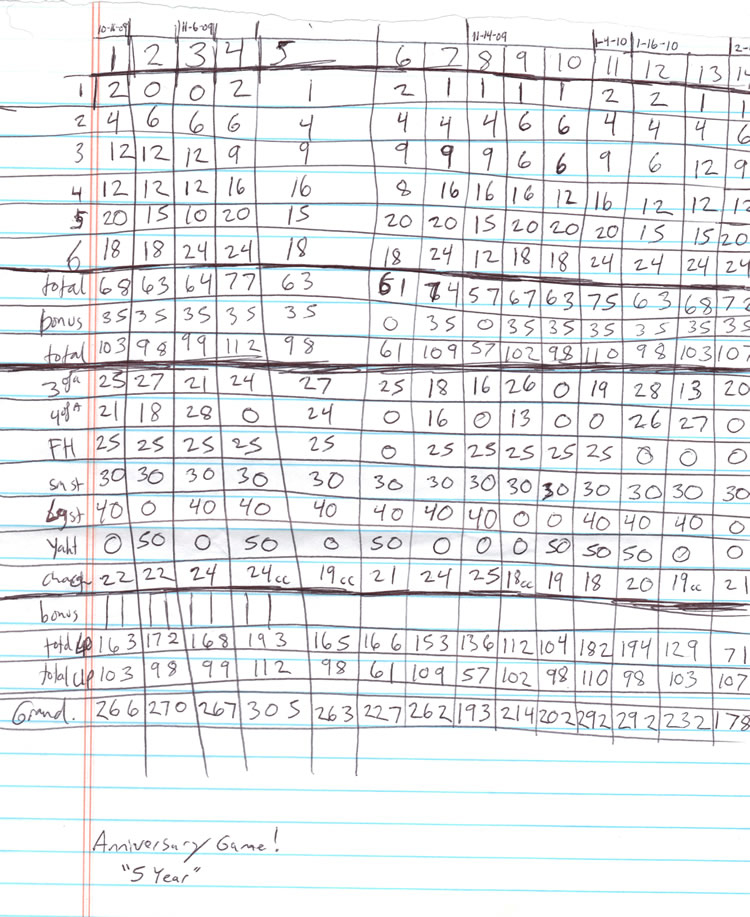 This player should have used a ruler to more effectively manage the available page space. 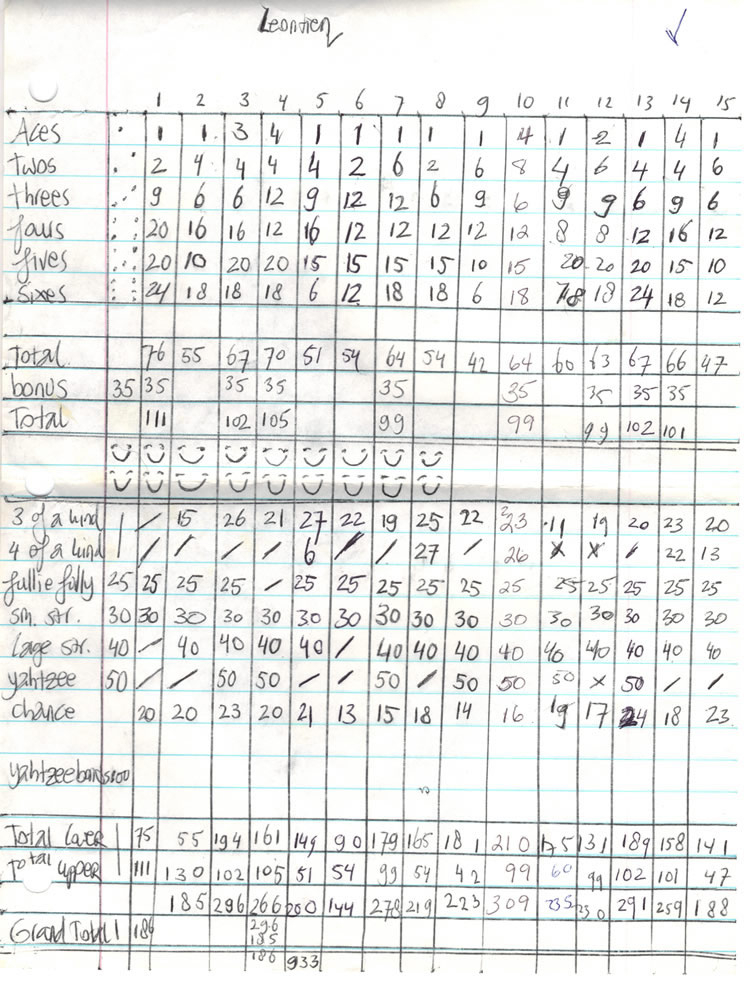 A neat and orderly Yahtzee score sheet. Penmanship is becoming a lost art but homemade Yahtzee score cards are a great way to refine your skills. 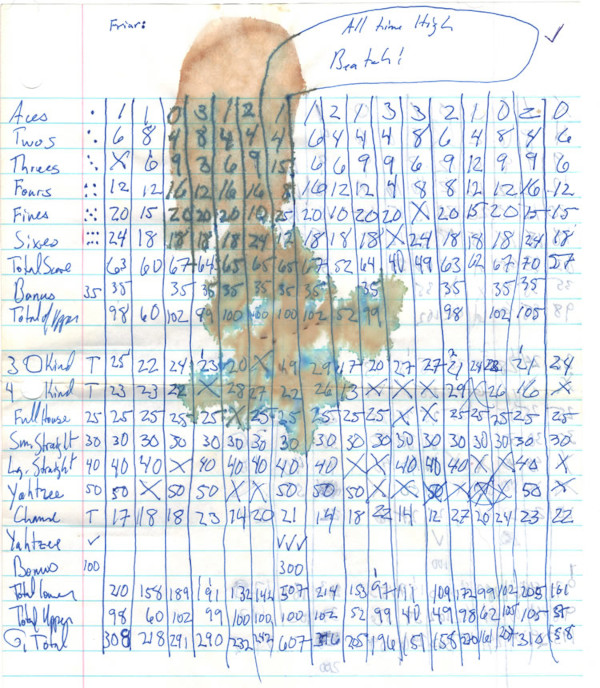